Our ancestors were the chief of the family who worshiped the Izumo-God on Shikishima, which was surrounded by the Makimuku River and the Hatsuse River in the latter half of the Jomon period (about 4,000 years ago).  In other words, Shikishima is a region name pointing to a sides of Mimoro mountain. The coronation of the first Emperor Jimmu was BC660 (2681 years ago).

The history of the Imanishi family began when Jiro Dayu Tomasa TOCHI, born the second son of the lord of Tochi-jo Castle Minbu Dayu Totake, became the adoptive son of his father-in-law Dayu Masayuki HIGUCHI who was a guji(chief Shinto priesthood) of Hirose-taisha Shrine whereby Jiro Dayu Tomasa became the owner of a territory over 8,000 koku where he built Kawai-jo Castle and began to refer himself as Minbu Shoyu Nakahara Tomasa KAWAI.

Imai was once the property of Kofuku-ji Temple(Source: Kofuku-ji Temple, Ichijo-in monastery documents, 1386). It quickly became Imai-cho, or Imai "Town," in the 1560's when Kawai Gombei-Kiyonaga, an ancestor of the Imanishi family, came to the area with Tochi Tokatsu and his vassals after the fall of the Ryuo-jo Castle. This castle belonged to the Tochi clan, to which the Kawai were related. Banding together with the Ikko-shu Buddhist sect in the fight against the then Oda Nobunaga , Imai-go was turned into a fortress whereby a moat as well as earthen walls were built around the town and, to guard the westernmost of that town, a castle-like structure (the present Imanishi family residence site) equipped with various appropriate features such as turret was constructed.The period coincides with the time when they fought in alliance with the Ikko-shu Buddhist sect against the then most powerful man in Japan Oda Nobunaga digging moats and building thick white walls around the town as a means of self defense. Although they were later made to disarm by Oda Nobunaga, they retained the right of autonomy, and the town prospered together with the neighboring town of Sakai with which it had a very close relationship. The town was referred to " Imai on the land," in contrast to " Sakai on the sea."


In the Tokugawa era, as society was settling down to a period of peace and tranquillity, a high level of autonomy developed, and the Tokugawa Shogunate officially recognized Imai as a town and made it responsible for its own administration and for the appointment of "sodoshiyori " and "machidoshiyori "administrative officials, as were established in Edo ( present day Tokyo,) Osaka, Kyoto, and Nara. It was around 1621 when the system of sodoshiyori was established in Imai. Initially, Kawai Yojibei ( later renamed Imanishi ) was appointed as town administrator. Kawase Nyudo-Hyobubo ( later renamed Imai ), Ozaki Gembei, and Ueda Chuemon were appointed later.

Nagata Gyobu-daiyu-Takanaga was a member of the Omi-Genji clan. His grandson, a son of Kawase Taro-daiyu-Takamitsu, lost his parents at a very early age, renounced the world, and became a priest. However, he later gave up the priesthood, and called himself Kawase Shinzaemon-Ujigane. Having asked and received the backing of the Toichi clan and the Kawai clan in Yamato, he was tonsured and sent to Osaka. He was made a disciple of the priest Kennyo-Shonin Kosa of Ishiyama-Hongan-ji Temple. He again changed his name, this time to Kawase Nyudo-Hyobubo, and was made the chief priest of Shonen-ji Temple, a training hall newly built by the Imai family for the use of the Kawai clan.

For generations, the Imanishi family served as the head of sodoshiyori's (town administrators).

Kawai  Gombei-Kiyonaga（Retrofitting Imanishi Masafuyu) protected the western exit in Imaicho from Toyotomi momentum at a war of Osaka summer camp , Shogun Tokugawa Ieyasu recommended that they change their name to Imanishi by reward of a war. And Shogun Tokugawa Ieyasu presented a Japanese halberd"Rai Kunitoshi" of reward to him. In this way they have called themselves "Imanishi" since 1621.

As described above, the residence of the Imanishi family, which had judicial and police powers, is located at the West exit of Imai town, and there is a moat on its Western side.

The road in front the residence used to be the main street leading to Sakai. At the Western end of the West gate there used to be a guard's hut. The outer walls of the residence were completely covered in white plaster. Below both sides of the main roof are small parallel roofs. The roofing is of the hongawara-buki style(Traditional tile-roofed style), and presents a magnificent castle-like appearance.

Since the honjin (headquarters of army) and family quarter had already existed prior to its construction in1650, the present-day Imanishi family residence was built in the second-phase but it has been told that, situated at the westernmost of imai town, it had a commanding air of a castle tower.

On the right front wall of the upper floor, is the Kawai family crest: a Japanese character for "kawa" meaning river enclosed by another I meaning a well.

On the left of the wall is the family flag emblem, three diamonds overlaying one another.

The ancestor of the Imanishi family, however, was originally of the samurai class in addition to making a major contribution during the incidence of the Ikko-shu Buddhist sect sect whereby it has been said that this house was built at the present location in recognition of his achievements.

Inside the house on the Western side, there is a spacious " doma, " or earthen floor. To the North side are large sliding doors opening to the outside. A " shimomise " (front reception room) is situated in the North-western corner. In all there are six rooms. The " mise-no-ma " (reception room), a " naka-no-ma " (Courthouse and central room), and " daidokoro " ( kitchen) lead off from the " doma ." Behind these rooms are a " mise-no-oku " (inner reception room), and a " nando " (closet), and a " butsu-no-ma " ( room containing the family Buddhist altar). The absence of pillars in the doma imparts a feeling of spaciousness. Chodaigamae in nando is the oldest in Japan. Chodaigamae is also called nandogamae. In traditional vernacular houses from at least the 14c, the entrance to the back chamber choudaigamae . The threshold was usually raised but the lintel was not lowered, to judge from surviving examples. A single wooden sliding door katabiki itado with a flanking panel of timber sodekabe, or a pair of panelled sliding doors, itado, flanked by half bay panels were the most common types. The flanking panels were often designed to create a strong accent, like the example at Imanishi Famly Residence (1650), Imaicho in Kashihara Nara, with its armour-style timber siding, yoroi shitami itabari. The panelled doors had a drop bolt, saruotoshi, to lock the door. Sometimes an extra runner was provided for sliding screens behind the panelled doors. Overhead you can see the framework of the roof,
centrally supported by three large beams.

In view of the facts that the former jail existed until recently and that ibushi-ro (smoke torture chamber) still exists today on the west side of the Imanishi family residence, it seems that so-doshiyori exercised police authority such as holding hold heinous criminals in custody as well. Additionally, the handcuffs used in those days remain in the possession of the Imanishi family today.

This building was reconstructed by Imanishi Masamori to use as a courthouse.
According to the writing on the " muna-fuda " construction plaque, " The framework was raised on March 23, the 3rd year of Keian." From this, we can establish that the structure was built in 1650. As such, this is the oldest private house in Imai. The " tsuno-zashiki " (corner guest room), in the South-eastern corner of the main building is also of the same period.
In terms of the above characteristics, except for the second floor zashiki, the structural style of Imanishi family residence has a commonality with that for the other existing old private residences in Imai town but only the former has maintained its original shape while the other houses have been altered as needed.

Mondays(On the holiday the next day off) 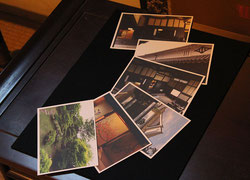 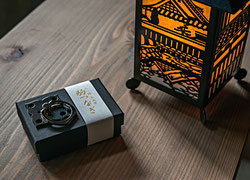 八つ棟 今井町 今西家「駒つなぎ」をモチーフにした【金属伝統工芸品】スマホリング
The smart phone ring by which Imanishi family made "the metal fittings which hitch a horse to a gate" a motif [metallic traditional work] 織田信長から今井郷に「大坂同然」と自治を許され、今西家においてお裁きが行われました。 江戸時代に幕府から許可を得て、今西家が札元となり、藩札と同じ価値の「今井札」が発行され、 「 ... (続きを読む)
￥8,000より
▶交通アクセス/access Map
▶お問い合わせ/Contact US